While still a student, Larry became a licensed Landscape Contractor in 1974, and formed Holmes Landscape Company. For the next few years he did design build work for residential homeowners that involved mostly landscaping and irrigation. Realizing that concrete work, retaining walls and hardscape items were as essential to large-scale projects as landscaping and irrigation, Larry obtained his General Builders License in 1978.

In 1982, Holmes Landscape expanded its business once again to include commercial landscape maintenance. The Burroughs Corporation in Carlsbad was among the company’s first commercial business customers, and Peacock Meadows in Oceanside was its first homeowners association client.

In 1985, after obtaining his California State Teaching Credential, Mira Costa College invited Larry to return as an instructor providing a unique perspective of owner and teacher of landscape management and landscape construction.

The success of Holmes Landscape Company can be attributed to the personal integrity and hard work of Larry Holmes, and to the many dedicated, hard-working people that he employs.  Larry Holmes demonstrates a work philosophy based on attention to detail, innovation, and customer service. Holmes Landscape Company has grown to become one of San Diego County’s leading landscape maintenance companies. 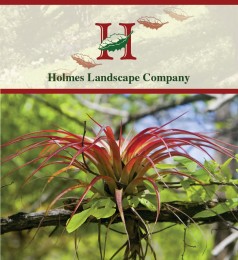